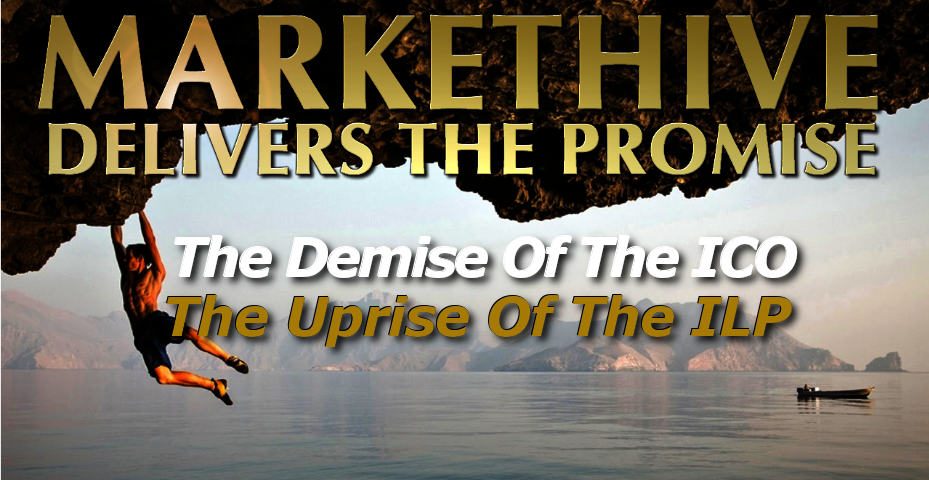 In the world of new technology, we saw a brief era between 2106 and 2018 with very little to no intervention by the authorities called the Initial Coin Offering (ICO). This was a new revolutionary way to raise capital for new projects and start-up companies. With the advent of Blockchain and Bitcoin starting to make its mark, scores of new creative projects with its own tokens or coins were popping up with promises and unfounded speculation every week. The best part was, even the public could get involved. In 2017 ICOs had reached their peak. Their tokens were reaching new highs and Bitcoin was going through the roof. This was a huge and very exciting time. Investors made money and some turned into millionaires in a very short time. It was perceived to be a win/win situation for everyone. But in fact, it turned out to be a devastating time for many.

There were companies that had creative ideas and products underpinning the project that truly made a difference in the world. Others were not thought through when they jumped on the bandwagon and launched promising big things but failed miserably. As it evolved and since there was no accountability, the ICO ecosystem was an easy way to make money. The ICO platform that was meant as a way to raise capital for genuine tech companies was now a haven for scammers. This led to the involvement of regulatory authorities and the rest is history. Many met their demise and the investors found themselves as proud owners of tokens and coins that were totally worthless.

As Brian Kerr, CEO and Co-Founder of Kava Labs exemplified,

“It’s part poor incentives, poor professional conduct, and part dev’s realizing they are working on bad ideas. Exit scamming was rampant in the early ICO era, but so was repeat ICO entrepreneurs that spun up ICOs as fast as they left them. Early ICOs were structured to pay out very quickly to founders, creating horrible incentives to stick around.”

As I stated some ICOs were a success and have made a difference in our lives bringing decentralization and worthwhile products in this new era of technology and cryptocurrency. So what made them a success? Below are 20 ICOs some successful with 45% of them failing. 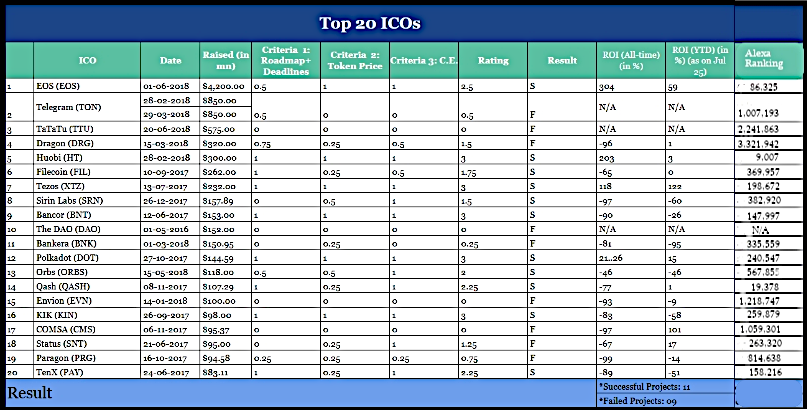 These are based on 3 main criteria.

Alexa Ranking plays a big part in knowing how popular these ICOs are. The lower the rank, the more traffic is visiting the site. It also demonstrates merit when securing potential advertisers and investors, as a representation of a site’s impressionable audience size. Alexa ranking is considered a relevant and important metric for webmasters and the public alike.

It is not uncommon for users to take a look at your Alexa ranking and rating before deciding if your website is safe and trustworthy enough to buy from.  It serves as a valuable metric to indicate a website’s popularity. It also serves as a comparative tool, to compare a website with that of competitors and see how well it’s doing in terms of traffic and popularity. A ranking of 100,000 and under is considered the benchmark for a popular site.

In the case of the failed ICO’s, they were very quick to launch with very little thought and nothing underpinning their projects. However, in many cases, it resulted in a quick way to make a profit and then exit. Since then there has been more regulation, fewer projects and less capital raised as a result.

Although ICOs are similar to an IPO, it’s important to note, it does not result in having an ownership stake in the company. ICOs essentially gamble with the idea that the currently worthless coin you pay for now will increase in value later and make you money. It is pure speculation and it has left many people devastated when these ICO’s and founders just disappear almost overnight as their promises just fade away into oblivion. Interestingly, 90% of the ICOs launched in 2017-18 have never produced anything.

A fundamental issue with ICOs is the fact that most of them raise money pre-product. This makes the investment extremely speculative and risky.

The ICO has become nefarious and been scrutinized by governments, institutions and even the average person looking for new opportunities to invest in the hope of a more financially secure future.

In Contrast To The ICO

The Incentivized Loan Program ™ (ILP) is a new way to finance projects by utilizing blockchain and has been created and utilized by Markethive, the first Social Market Network. It is an alternative crowdfunding means of raising funds, and it does bypass some of the issues that have slammed ICO’s credibility.

The ILP is essentially a loan and is regulatory friendly and in compliance with the UCC Code, in that, they can be compliant even with the most stringent regulatory frameworks around the world when it comes to fraud and money laundering. ILP holders also share in the success of the company and enjoy a form of a return via interest from the net profit of the company after the initial loan is reimbursed. It was just a matter of time and some forward-thinking for the Blockchain and crypto to be integrated into Inbound Marketing and Social Media. It’s not just for the benefit of supply chain industries or crypto traders anymore. Blockchain-based technologies can provide marketers, bloggers, commercial artists, in fact, anyone on social media or marketing platforms, with greater benefits for their products and services such as fairness and honesty, freedom, better cost control, heightened security, and privacy.

In Markethive’s case, the Incentivized Loan Program ™ is an effective way to engage individuals globally, who otherwise wouldn’t have the funds to participate, given that an IPO often asks for a hefty minimum dollar value. Markethive is the first to offer the Incentivized Loan Program ™ and will be one of the first companies to raise capital by decentralized crowdfunding of debt.

Markethive has been in Beta for the last 4 years ensuring all aspects of the company are in place with perfection. Although still in Beta many products and services are already in operation, earning revenue. These are a hybrid mixture of a full suite of inbound marketing tools and digital media sites with a dynamic integrated social network. The system is constantly being updated with portals and hubs and some are still to be added prior to Launch.

Markethive has seen tremendous growth through its proprietary Incentivized Loan Program ™ and has raised over $500K and at the end of 2018 had 2,000 members, which is now approaching 25,000 members to date and growing every day. Markethive has built the technology, has the products and services and now requires funding to market.

Furthermore, at the end of 2018, Markethive was generating about $1,800 per month in revenue, and now approaching $10K in monthly recurring revenue. 4 more revenue streams have also been added. Markethive is increasing its revenue at a rate of approx. 30%-40% each month.

Notably, looking at the list of successful ICOs above, Markethive is placed at No. 2 in terms of Alexa Ranking.

Markethive.com, the website, is receiving 50,000 unique visitors a day and over 1Million page hits each day according to Cloudfare Statistics. With a total social reach of 40K followers and growing every day as well as a community reach of 45K+, by years end the projection is a reach of over 333 Million social media/internet users.

It’s also worth noting Markethive’s Consumer Coin (MHV) has a current Marketcap of $18.7B as per Coinranking.com

The CEO and Co-Founder of Markethive, Thomas Prendergast said:

“I have every confidence that we have sitting in front of us the ability to reach 500 million subscribers in Markethive within a year. Our social networks have grown exponentially in the last few weeks now at 40,000 with functions in place to increase our followers into the multi-millions.”

Given that Markethive has survived the crypto winter, the demise of the ICO era and regulatory intervention and crackdowns, the future looks very bright. Markethive is solid and backed up by being 4 years in Beta. It has raised the funds and built the technology. Now requiring funding for the marketing of the system. It has the products and the underpinning technology needed to be the success and fulfill the vision as originally intended by Thomas Prendergast.

Markethive’s growth and ever-improving Alexa Ranking, community involvement, the fact Markethive is a Social Network with continued interaction and engagement on the platform, becoming more prevalent each day moving forward. A social media platform with all the essential inbound marketing tools needed for growing a business, along with a cryptocurrency ecosystem to ensure universal income for its members. This company is not only poised for a successful launch of its system and Consumer Coin, but it is also set for long term growth and is the next generation of how we interact and conduct business online.