MacAfee – A Revolution Of One Running For POTUS

MacAfee – A Revolution Of One 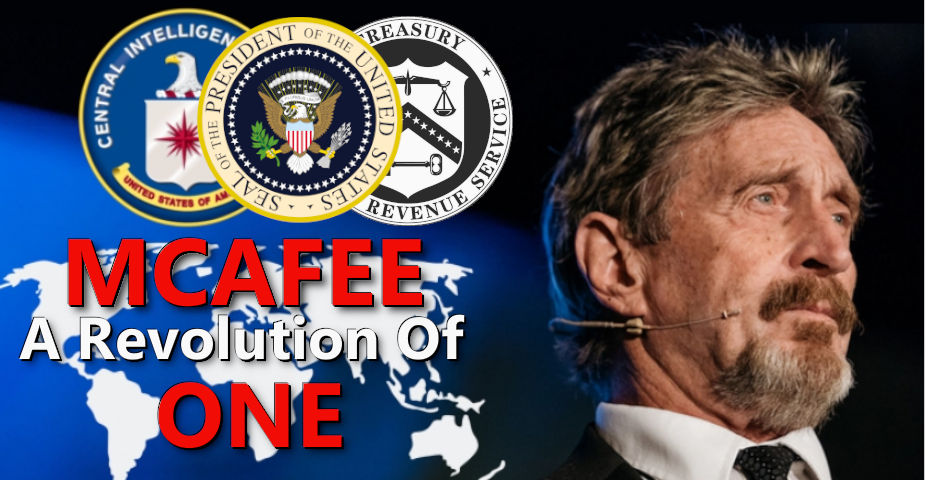 The adventures of John McAfee has been a fascinating and ongoing saga full of intrigue. He is certainly an international man of mystery. McAfee has been on the run from authorities since 2012 when he was accused of fatally shooting his neighbor in Belize. He is still currently a person of interest but denies any involvement. He escaped Belize without making himself available to talk to the Belize cops as he believes it is just a ruse to capture him for the US authorities who he maintains they want to silence him, for good.

His main communication with the world and his 1.2 million followers is his Twitter account where he stated.

“I want you all to know that everything I have done, I have done for the cause of freedom, I want a world in which authorities discover crimes, not manufacture them. A free world.”

He is currently on the run evading the US authorities who earlier this year indicted him for tax evasion. Communicating out of his Faraday cage, in an unknown location somewhere in this world, McAfee does keep himself busy working on many different projects. He is running his presidential campaign for the 2020 elections and has enlisted 1000’s of volunteers in the US across the nation who are doing a thorough job in his absence.

“I Am a presidential candidate with 1.2 mil followers. My crime is not filing tax returns – not a crime. The rest is propaganda by the U.S. government to silence me. My voice is the voice of dissent. If I am silenced, dissent itself will be next.”

McAfee claimed the world did not need income tax and should his run for the White House be successful next year, he will abolish it.

‘In America, prior to the civil war, we had no income tax and we survived fine” he said. “There are a thousand ways to vastly improve our country and our government with no taxes. Road use is one. We have millions of miles of roads in America. What if we pay based on our use of the roads? Why should someone who never uses them have to pay the same as someone who does a million miles a year? That would generate enough revenue to pay for everything”

Although he always had a problem with income taxes, eight years ago John McAfee had no problems with the IRS, especially after paying a hundred million dollars in taxes. He then suddenly became a target for the IRS because of his talks about how people can avoid income taxes using Bitcoin.

Soon after, John finds out that he and his whole family received unspecified IRS charges and a court date. Refusing to put his family in harm’s way, he sailed to the Bahamas where he discovered that the Bahamian government also had a list of ridiculous charges from the IRS against him. John went to Cuba, but the chase with the US government continues. John encountered a lot of obstacles while on the run against the IRS, leading him to hide in an undisclosed location in Eastern Europe until the 2020 Presidential elections arrive. 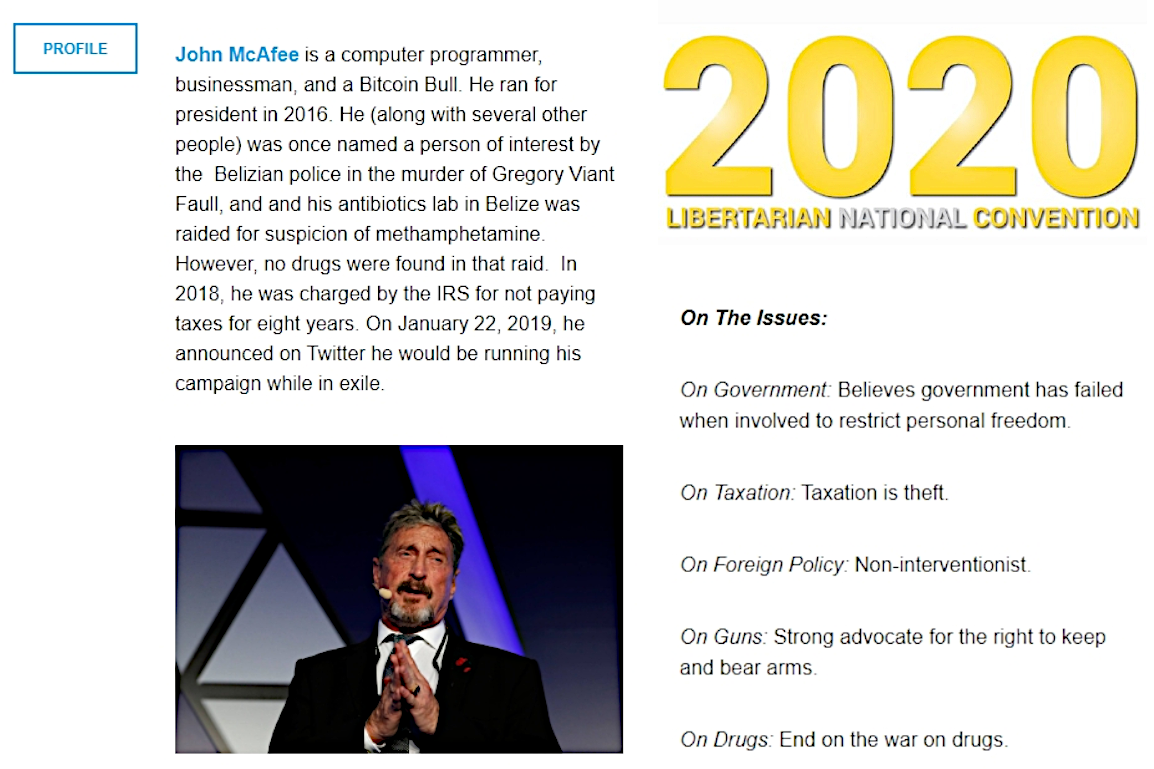 He does have a wicked sense of humor and very entertaining. Although some people think he’s paranoid and somewhat delusional, it has to be said, he seems to be more in touch with life, very philosophical, with a sincere sense of empathy and it certainly does take a character like him to stand up and help lead the world out of its turmoil and tyranny.

As a crypto advocate, he sees the incredible freeing possibilities Blockchain and Cryptocurrency can have on society. He urges people to educate themselves and we will be looking into his crypto habits and advice along with his extraordinary adventures, past and present in subsequent blogs.

Not In It To Win It

John McAfee ran for president in 2016 under the libertarian banner. He got in all the debates including the national debates back then. He said he had “a blast”, but he went about it all wrong.  He was playing politics as normal, but this time he isn’t. He is running for US president on a pro-cryptocurrency platform.

McAfee knows he will not win and doesn’t expect to. He is running purely because it gives him the opportunity to access the national stage to try to wake people up a little more. To paraphrase, he says, it is a mistake to underestimate the intelligence of the average American person. Slowly people are waking up to what they are subject to by the Governments, higher authorities, and oligarchs.

McAfee seems to have realistic expectations for his current presidential run saying,

“Don’t think I have a chance at winning. I do not. But what truly changes America is not the president, but the process of creating one”

When all said and done, McAfee’s presidential bid will raise his profile and probably won’t do any damage to his bottom line either. John revealed he is charging $105,000 per tweet to promote a cryptocurrency or an initial Coin Offering. Up there for thinking!